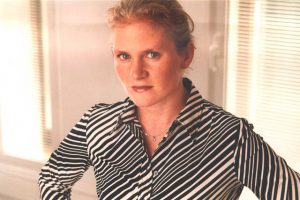 At pivotal moments in our lives, there is often a key person that helps us bring about change. Someone without which we couldn’t open doors or make a leap of faith.

Before my current business, I ran a joint venture with ad agency Bartle Bogle Hegarty (BBH). As a statement of intent, the company was called Leap Music – it was the first music publishing company inside a UK ad agency. The person instrumental in this new venture was Frances Royle, the Head of TV Production at BBH. Without Frances, Leap would never have happened and I wouldn’t be running Resilient now. With Leap, Frances and I set out to make waves, and we did. Lots of press, lots of backlash from the music industry. We loved every second. It felt like we were partners in crime.

Frances had a reputation for being a very tough negotiator and was feared in some quarters. She was also very loyal, kind and supportive. In difficult periods during my seven years at Leap, Frances stood by me against Leap’s critics. As co-directors of the company, we had a point to prove.

I left BBH in 2010; Frances left two years later. We each established our own businesses and continued to work together. I met with Frances every few months and it was always a joy to catch up over tea.

Frances died in July last year. She was 51, a year younger than me. I heard the news by phone on the day I moved into my new house in Worthing. A tragic mix of a new life chapter for myself, coinciding with the loss of someone very important to me.

Frances’ death was a shock to the industry – there were many commentaries, one of which is here. Some months later, there was a large memorial gathering with very moving eulogies from John Bartle, Nigel Bogle and John Hegarty, the three founders of BBH.

Nearly seven months has passed since Frances’ death but I still think about her most days, especially when I’m in touch with ex BBHers. When I’m considering a decision, I often think “what would Frances do?” She had huge commercial drive but underpinned by a deep integrity. So she’s like a sounding board in my head helping to guide my actions. Although I’m not religious, I do believe this is how those who have passed, live on in others.

The other key effect of Frances’ death was a profound sense of our mortality. With this comes a desire to live every moment like it’s the last, though not in the reckless sense. It’s more about saying Yes rather than No. Seizing every opportunity. A “Just Do It” attitude. I could be here for another 30 years or only 6 months … and I have no way of knowing.

At BBH, Frances and I worked on many Vodafone campaigns with the strapline “Make The Most Of Now”. That seems more pertinent than ever.

Live for the moment.