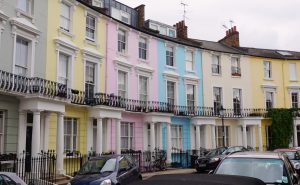 I spent last weekend in London with a special friend. On a cold bright Sunday, we strolled north up The Broad Walk through Regent’s Park, retracing the steps I’d made so many times in my twenties. I wanted to revisit Primrose Hill and the house on Regent’s Park Road where I spent eleven formative years in the 80s and early 90s.

Without the cream coloured uniformity of Nash’s Regency terraces in the park, the houses of Primrose Hill are more varied. A tasteful mix of many pastel hues. These are clearly people’s homes rather than empty second properties or embassies. These days the residents are famous actors and bankers, rather than struggling musicians and artists of thirty odd years ago. Around the neighbourhood, some of the pubs have gone, many shops have changed but I noticed a few familiar faces such as Primrose Hill Books, Lemonia and Odette’s.

Walking through the streets and climbing Primrose Hill, the memories came flooding back. I’d experienced so much around here. Excitement and disappointment, success and failure, love and heartbreak. Maybe not all in equal measures, but enough to mould me into who I am. Although it felt like another lifetime, I could remember it all so clearly. What if I could blink my eyes and time travel back to precisely the same spot three decades earlier? What would I say to my younger self that might have been useful? Would my younger self have listened?

During many of the years in Primrose Hill, I played clarinet in a band called Miro led by Roddie Harris. One of his songs from the Angel N1 album was “The Familiar Unfamiliar”. Roddie’s lyrics explored how the visible past was in-front of us whilst the invisible future was behind us. I was probably too young to appreciate the meaning back then, but over the years it’s come to make sense. Places, taste, smell and especially music are powerful triggers for unlocking memories – through them we can replay our mind’s eye film of events from long ago. The challenge is finding an insight which we didn’t see at the time and apply it to what we do next.

As Danish philosopher Soren Kierkegaard said “Life can only be understood backwards; but it must be lived forwards.” What lessons from your past are only clear now but can help to shape your future?