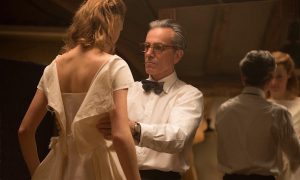 A few weeks ago, I had a chance to see The Phantom Thread in the screening room at The Hospital Club. Paul Thomas Anderson’s film has received rave reviews, including from The Guardian’s Peter Bradshaw.

Daniel Day Lewis’ portrayal of celebrated dressmaker Reynolds Jeremiah Woodcock is fascinating. On the surface he can be controlling and almost tyrannical, even with his beloved muse Alma, wonderfully played by Vicky Krieps. As the only man in the 1950s fashion house, he initially appears to rule the roost. He’s frequently irritable and dismissive with both staff and Alma. However, over the course of the film, we realise that Woodcock’s veneer of authority is flawed. His sister Cyril, played by Lesley Manville, is the real power behind the business throne … and in matters of the heart Woodcock becomes vulnerable and eventually a willing participant in Alma’s schemes to weaken him with poisonous mushrooms.

Strip away the superb acting and sumptuous sets and this is a story about power – and the struggle to gain the upper hand. It’s a very common theme in intimate relationships where there can be a constant ebb and flow of power between lovers.

There’s also a parallel in business as all commercial relationships are essentially between people. Whether it’s between talent and agent, consultant and client, brand and agency, advertiser and music rights owner, there is a balance to be achieved around the fulcrum of a deal. What’s interesting is that it’s not always about the size of one party versus another. It’s often more about need, urgency and exclusivity – the same elements that govern how personal relationships work, especially romantic ones.

Smart deal makers use emotional intelligence to consider not only the hard commercial points but also the soft issues – essentially how both they and the other side feel. Is it a one-time deal or part of an on-going relationship? This may affect how the parties behave. Ultimately we do business with people we like, so finding the right balance of power is essential.

What can you learn from The Phantom Thread that can be applied to your business life? Do let me know.