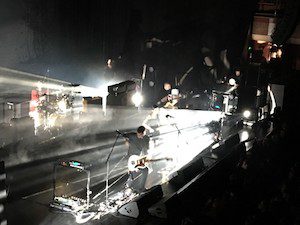 I go to quite a lot of gigs. I’m fortunate to receive regular invites from labels and publishers, and having recently moved down to the South Coast, I now love to go to shows in Brighton. It’s close, the journey is easy and the audiences are really friendly.

Last night, I saw Wolf Alice at The Dome in Brighton. They’re signed to Dirty Hit, an independent label I’ve long admired – also home to The1975 of whom I’m a big fan. I’d seen Wolf Alice a couple of times before, once supporting label mates The1975 and once headlining at The Forum in London. I loved the band’s first album but in live shows, I sensed that something was lacking. The singer in particular seemed shy – almost like she didn’t believe she deserved to be on stage.

Touring is an increasingly key component in a band’s success. Live income is often higher than from sales of recorded music, and constant touring helps bands to hone their craft.

The show last night couldn’t have been more different from the last time I saw Wolf Alice. They had swagger, they looked like proper rock stars, they owned the stage, they played brilliantly, the crowd went nuts.

The singer, Ellie Rowsell, was amazing. You could tell that she absolutely believed she deserved to be there. The performance was wild but in a controlled and slick way. She knew she was great and so delivered a great show. Having got past “difficult second album syndrome”, Wolf Alice now look to have made the move to the next level of bands that have longevity.

The lesson for me from last night was “look like you mean it”. If you believe in what you do and say, so will others. This is essential in any negotiation, particularly when you draw red lines or make best and final offers. It’s all about authenticity. Wolf Alice have this in spades. If you’ve not discovered them yet, do that HERE.