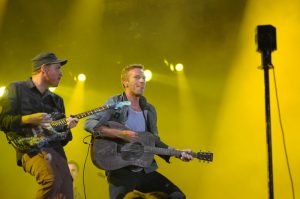 “Yellow” (Champion/ Martin/ Buckland/ Berryman) was one of the earliest hits for Coldplay.

Note the music publishing convention of how the song title is written within inverted commas with the surname of each songwriter in brackets, separated by a forward slash.

It’s important to remember that for many bands, all the members are named as songwriters even if in reality their creative input may vary from title to title. Coldplay are known for their egalitarian views so it’s no surprise to see this in practice in the way their songs are registered. U2 follow the same model.

The lesson for brands is this:

For songs performed by bands (as opposed to solo pop artists or boy/girl groups), it’s common that the artist and songwriters are one and the same. Of course there are separate record labels and music publishers representing the different aspects of the band’s creative output. However, all the requests for approval will probably end up with one manager acting for one set of people – The band.

Why does this matter?  If you’re both the artist and the songwriters, you might not want anyone else recording your song for use within a commercial. So, you might block any attempt by an agency to re-record the song by specific provision within the publishing rights clearance. i.e. if you want the song, you have to license the band’s recording of it.

Brands & agencies sometimes forget this by not fully disclosing their intentions in the initial licence request for the song – only to come unstuck later in the process.